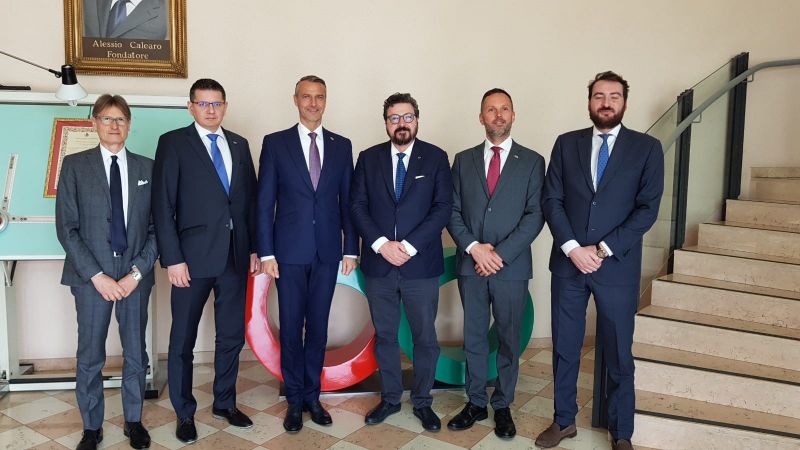 A Delegation of the Slovak Government visited the Calearo Antenne's plant in Isola Vicentina on Friday, March 15, 2019.

Calearo Antenne Spa welcomed in its headquarters the delegation of the Slovak Government:

Patrik KRAUSPE,Director the Deputy Prime Minister for Investments and Computerization's Office of the Slovak Republic;

Martin DORČÁK, Counselor of the Deputy Prime Minister for Investments and Computerization of the Slovak Republic;

Rudolf DURDÍK,Economic and commercial adviser, Embassy of the Slovak Republic.

The visit of Slovak diplomats is not the first in the Vicenza area, nor in the company specializing in the designing and production of car antennas, but follows other meetings and consolidates the relationship that has developed over the years between the Slovak State and Calearo Antenne .

Calearo Antenne, present on the Slovakian territory since 2003 with a production plant Calearo Slovakia has recently doubled the volumes of its Samorin plant,
with an investment of four million euros, of which two million in highly technological facilities.
The company, which has long considered the Slovak plant the first in terms of production volumes and strategic importance, confirms its commitment in the area with the important investments.
It is precisely in Samorin, where the new generation of electronic circuits will be produced for the most technologically advanced cars to be equipped the thanks to the newly installed SMT (Surface Mount Technology) line.

90 years of great future on her shoulders

She successfully raised 3 generations of family. She devoted herself for the last 65 years to Calearo Antenne. She actively contributed to the evolution...

Meet us at EIMA International 2021

Meet our team at upcoming EIMA 2021, the leading Exhibition of Machinery for Agriculture.Visit us at HALL 20 - STAND A7 from Tuesday 19th to Saturday 23rd...

Visit our stand 5A G 045 at upcoming Milipol 2021, the leading international event for homeland security and safety. Our team looks forward to meeting...